Today when we arrived to Madeira we quickly realized it would be one of our favorites.  It was one of those beautiful islands with colorful houses built up the mountainside and cute little fisherman villages built around coves.  Funchal was the main city and was rather large.  It had the big squares, cobblestone streets and historical statues/monuments.

Even though the “hop on, hop off” buses always appeared like a tourist trap to us…we decided to try it.  We didn’t have a lot of time on this island and this would be a great way to cover a lot of ground.  We were glad we did it.  It was a double-decker bus and we had the top part all to ourselves for most of the tour.  They give you earphones that you plug into the seat in front of you with several languages.  You tune into your language and the voice tells you about things as you pass by them.  You can jump off the bus if you see something you want to do and jump back on the next one.  This company had two routes, one bus drove through the main city sites and the other one drove outside of the city, around the island to a small village.  We took both tours for the same price.
Once our bus ride was complete, we found ourselves sitting in the main square sipping tea/coffee and munching on a scone as we people watched.  We also ran into a place called Blandy’s which makes various ports…so of course we tried them.
Once back on the boat we opted for the Mexican restaurant which was actually really good food and settled in for a movie in our room.
We received an email from our surgeon whom we had sent pictures to of the incision and stitch from the Barcelona ER.  Unfortunately the hole was still there and our doctor said we would either need to find a plastic surgeon once we got off the ship to re-cut the scar and stitch again or come home to have it done.  We went to bed stressed. 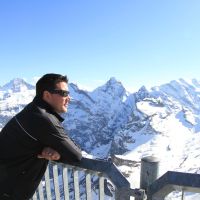