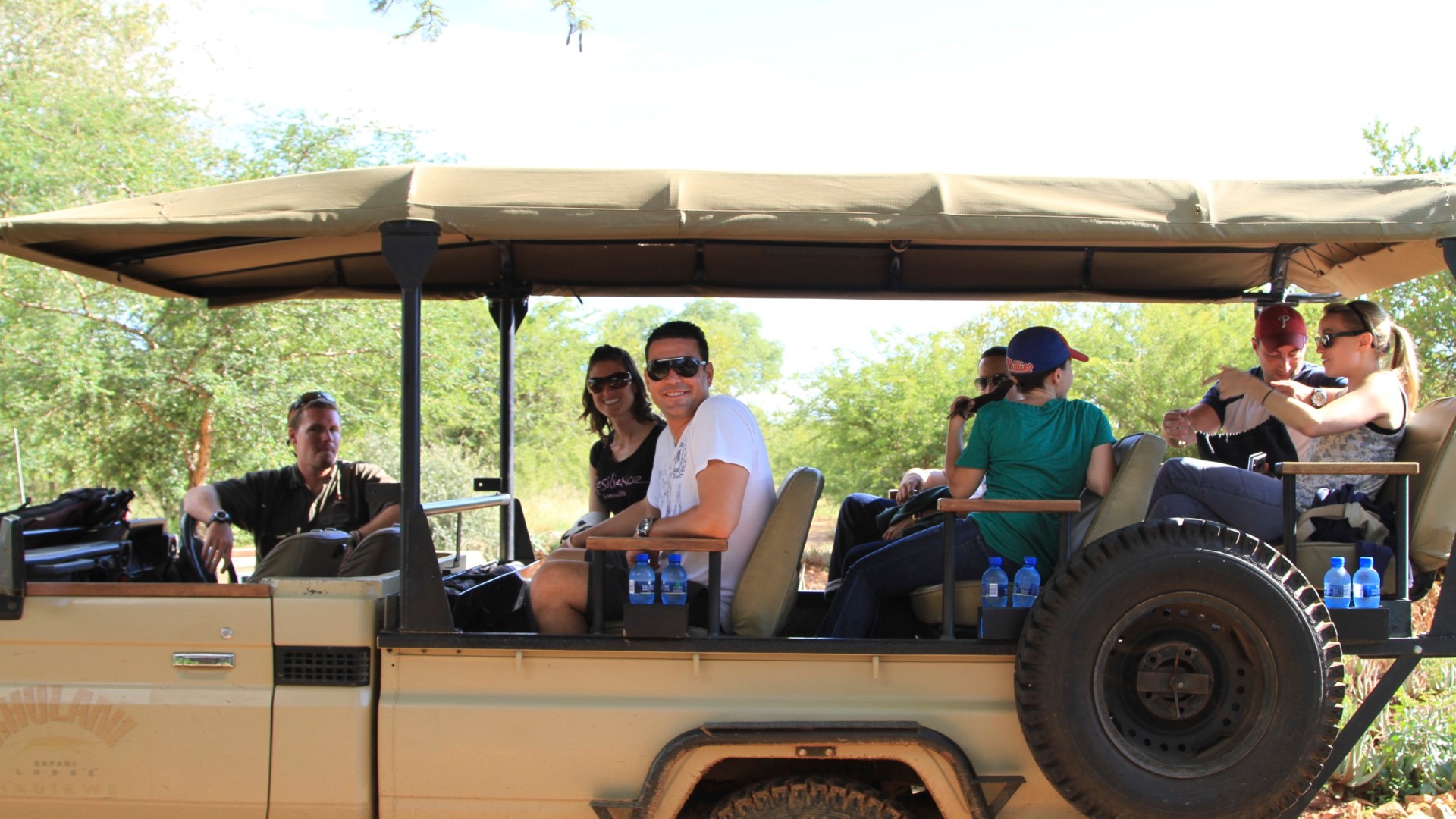 After lunch we jumped back in the jeep with four other people from the lodge and set out for our very first safari drive. It was such an amazing experience to be driving in the middle of the wild on dirt roads…with wind in our hair as we sat in the open-air jeep scanning the bush for animals. We drove around for about four hours and saw more zebra, Impala, kudu, a brown hyena (rare to see), a rabbit and some cool birds. Since it had just rained over the past 2 days…things were very muddy which meant the jeeps couldn’t go off-roading and the animals didn’t need to travel very far to find water.

As the sun was setting, the ranger pulled the jeep to the side of the road and pulled out a little table he attached to the front of the car. He laid out some dried fruits, nuts and jerky as well as a few cold beers. We climbed out to stretch our legs…we enjoyed the sunset, ate some snacks and chatted.

We got back in the jeep and headed back through the dark to the lodge…the ranger held a heavy-duty flashlight against the bush as we drove, in case a nocturnal animal was roaming around. Back at the lodge, the staff was waiting to greet us as we arrived…they handed us a warm wash-cloth and a glass of port. Giff and I went back to our room for few minutes (escorted of course since it was dark) to get cleaned up. Dinner was served by a fire outside on the patio. The first course was smoked salmon stuffed with a creamy cheese which was followed by a salad and then Giff had the venison and I had the fish. The venison was by far the better choice and I don’t really even like venison, there are no fish swimming around here…it makes sense to go for the meat! For dessert, they served flan and then we realized it was already 10PM…we had to be up at 5AM for our next game drive. We excused ourselves and were escorted by our ranger to our bungalow.

At our doorstep, we stopped and gazed at the sky…it was the most beautiful sky we had ever seen. The milky way was so clear as was planet venus and many other star constellations. There is almost no pollution here on the reserve…so the sky is as it should be, it was gorgeous.

After a hot shower, we climbed through the mosquito net into bed and fell fast asleep.