It is our first official day on a long tour through SE Asia.  Now that we are here in Thailand…it seems very easy and cheap to get around on our own, but we weren’t sure that would be the case so made arrangements with a tour guide (Thailand Treks) for the next couple weeks  since we will be going over borders between Laos, Cambodia and Thailand.  The van picked us up early this morning, and then continued picking up the other people who had signed up for the “Golden Triangle” tour.

After about an hour of sitting in the van with a crazy driver who was making us all very car sick, we stopped at a place they called “hot springs” to stretch our legs.  We saw the little mini “hot spring” and took a few minutes to look at the vendors lined up in hopes of selling their items to tourists.  After about 20 minutes, we all got back in the van for another hour of crazy driving…we arrived at the Wat Rong Khun temple or White Temple which is a contemporary Buddhist and Hindu temple, created by Thai artist Chalermchai Kositpipat.  It is one of the most beautiful and architecturally distinct temples Giff and I have seen so far.  The whole thing is all white symbolizing purity with white glass symbolizing wisdom.  In order to get to the entrance, we had to walk over the white bridge…underneath were tons of sculpted arms with hands reaching up.  The big white bridge represents the crossing over from the cycle of rebirth to the Abode of Buddha.  There is a semicircle before the bridge which represents the human world which is followed by the big circle with fangs which is the mouth of Rahu representing hell, suffering and the impurities of the human mind.  This temple looks like something you would see in a painting or drawing…a very imaginative piece but they actually built it…

The hot springs was a bummer and the car ride has been rough but this temple was really spectacular to be able to see in person.  After another 45 minutes or so, we arrived at what they call the golden triangle.  It is where Burma, Laos, Cambodia and Thailand all border each other.  It use to be a very dangerous area…it is where much of the world’s opium is produced.  They are trying to change that farming into other crops, but there is still opium being farmed in the area…specifically Burma which is ranked second largest producer in the world (next to Afghanistan).

The van parked in the lot and we were each handed a ticket…we were herded into a long-boat where we put on dirty life-jackets and listened to the guide talk about the golden triangle.  As the boat glided along the water, the guide pointed to where we had just been standing and told us that was Thailand.  Then she pointed to another set of mountains with a building and said that was Burma.  Then she pointed to an area she said was Laos…and after about 10 minutes, the boat pulled over and she let us get out on the Cambodia side of the river.  She told us we had about 30 minutes and then would get back on the boat.  We all climbed out and at the top of the hill were a bunch of vendors with their goods for sale.  We felt like we were in a tourist trap…putting us in a boat to point to land and tell us what it is and then let us out to a tiny area of over-priced tourist trinkets?  We did not sign up for this.  We walked around looking at the dusty souvenirs and then got back on the boat…they took us the 5 minutes back to the Thailand side and said the tour was over!  We piled back into the van disappointed and they drove us to a place for lunch.  Much like the China tourist lunches…this was no different, a big buffet of oily half eaten foods waited for us.  We put on our plate what we thought was eatable.  We saw one table where the food was being made to order…it was soup with fresh noodles.  We both ordered a bowl and brought it back to our table.  As I went to scoop up a bite of noodles, I saw a couple of dead ants rise to the top of the bowl…ummm, is this a joke?  We have to pay for this?  What did we get ourselves into with this tour company?

After everyone ate, we were back in the van driving for about a half hour until we reached the border of Burma.  They told us we had 30 minutes and then would need to get back in the car.  Giff and I were getting really agitated by this point…the drive up here was about 3 hours and everywhere we have gone, they have only let us out of the car for no more than 30 minutes.  The area was buzzing with people, we enjoyed walking amongst the chaos as locals were selling their goods to other locals as well as tourists.  The specialty seemed to be chestnuts which were being roasted on an open charcoal fire.  We tasted one which wasn’t so good and bought some of the fresh oranges off a big cart…they were so sweet and juicy.  The trinkets they had for sale didn’t interest us so much but we could have used an hour or two to really explore more than just the main road in this area.

After our Burmese experience, we drove another hour to the Karen village.  The hills bordering SE Asian countries are full of tribal villages, and the Karen tribe is one of the largest…they allow tourists to view their community.  We parked in the lot and once we were out of the car, the guide told us we had to pay extra to actually walk in the village…the money goes to the Karen people.  We paid and then followed our guide over the bridge and around the simple little huts made of bamboo, sticks and straw.  There were chickens running around between the huts and the ground made of mud is where some of the boys were playing soccer.  As we walked by the huts, we realized how simple these people are living…we continued walking and saw a little area where some of the women were weaving by hand the silk scarves and displaying them for sale to tourists like us who visit their village.

There are many different tribes whom all fall under the Karen people, one of the sub groups are the Padaung people whom are known for wearing rings around their necks and legs making them appear to have elongated necks.  The weight of the brass rings actually push down the collar-bone and compresses the rib-cage, causing bruising and discoloration as well as very weakened neck muscles.  There are several theories on why these indigenous people carry out this strange custom.  Some say their mythology tells them it will prevent tigers from biting them.   Some say it is used to make their women unattractive so they have less risk of being captured for slave trading.  Still, others say it is actually a sign of beauty and wealth and will attract better husbands for them.  Although some of the tribes particularly in Burma have stopped this tradition, others specifically those  living in Thailand are continuing due to all the tourists and the money they get from their visits to the village.

It was sort of strange to be gawking at these women and taking pictures of them.  It was kind of awkward but at the same time not something we have ever seen before so couldn’t help but to stare.  The women were very friendly, smiling and agreeing to be in our pictures hoping it would prompt us to buy their scarves, which we did.  We walked around to the various women looking at their different scarves and buying a few before leaving the village.  As we left the village, we walked back across the bamboo bridge which looked like it could collapse at any moment…but we made it to the other side!

Back in the car, we drove again for another half hour until the van pulled over to the side of the road and had Giff and I get into another car with all our stuff.  The rest of the group stayed in the van to drive the three hours back to Chiang Mai but Giff and I were staying here in Chiang Rai for the night, as we will continue to travel across the Mekong river to explore more of SE Asia.  The guy who picked us up was nice and spoke perfect English being he was from Europe.  He drove us the 20 minutes back to his house where he and his wife ran a B&B.

Since we had been in the car literally for about 10 hours today vs the 3 hours we had been out of the car, we decided to stay at the B&B and order dinner cooked by the owner while we sat outside on the patio.  The B&B owners were nice, the property seemed peaceful and the food was good.  After spending some time outside, we went to our room which was nice and spacious and watched a little TV before bed. 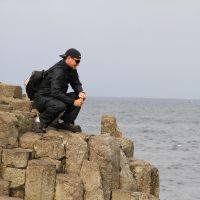