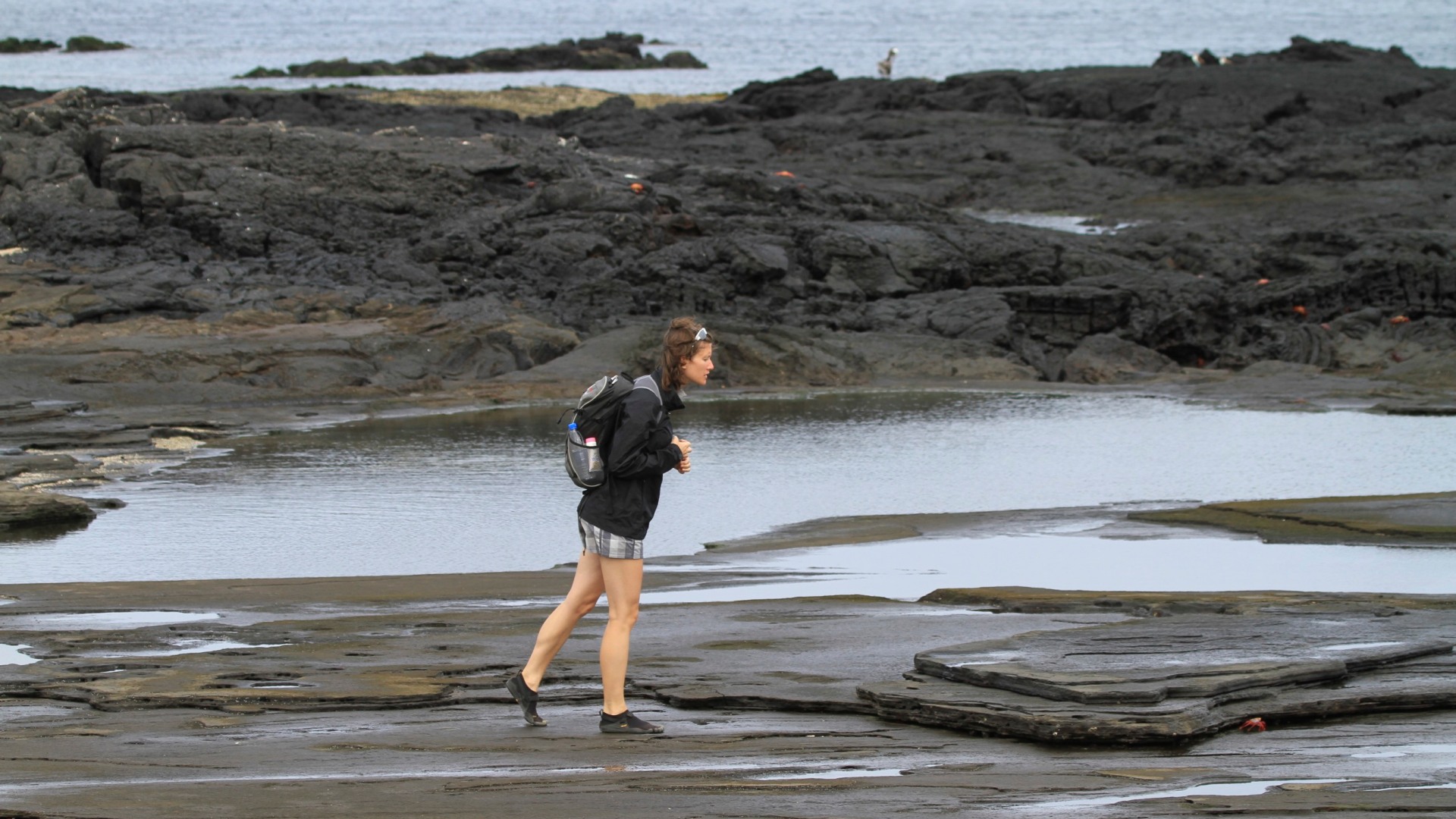 We started our day on Santiago Island, one of the larger islands in the Galapagos.  We walked along the rocky lava coast looking between cracks and around rocks for hidden creatures.  We saw many Sally Lightfoot crabs scurrying away as we approached…they are eaten by quite a few animals so it makes sense why they would disperse when we came too close.  There were 100s of land and marine iguanas basking in the sun…some of which were piled on top of each other.  The guides informed us they were not cuddling, they were using each other’s body heat for warmth.

The bright yellow finch we saw standing on the black rocks, beside the green moss, by the dark sand beach was so colorful.  There were multiple sea lions lying around on the rocks, some with their cute little fin covering their eyes as they slept.  There were multiple crevices filled with water within the rocks where some of the sea lions were taking baths and playing with seaweed.  It was fun to watch them dive into the water and out into the ocean.
We also saw many lava lizards throughout the island, all of which had different patterns on their skin helping them to blend with their background.  The female lizards had bright red on their necks, making it easy to differentiate them from the males.  When lizards are feeling threatened, they react by doing what looks like push-ups…their head moves up and down…someone should tell them it’s really not that scary.  Interestingly, they do have a good defense mechanism if caught by a predator.  They can detach their tale from the rest of their body, giving them a chance to escape…the tale grows back.
After our morning walk, we were back on the boat to change into snorkeling gear.  Once in the panga and in the snorkeling area…we jumped out of the boat and into the water which was along a rocky coast.  The water was much warmer than yesterday and we saw numerous schools of colorful fish swimming below and around us.  We also saw multiple starfish and a hammerhead shark.  When we came out of the water, we saw penguins sitting right on the rocks.  They were so adorable in person…not just cartoons.  They were like little torpedoes…they would dive into the water and move fast right past us as they swam.  The fish who seemed to be slowly swimming would quickly move out of their way.  They were not afraid of us, yet we were extremely close.  We took some pictures with our water camera and had fun staring at them both in and out of the water.
After snorkeling, we were back on the boat playing cards until our afternoon hike which was on the tip of Santiago Island known by its shape of a “Chinese Hat,”  The island was made of solid lava rock, and we hiked on the path through to the top.  The terrain was almost like being on another planet.  We saw one plant able to grow through the rocky crevices which was some type of cacti.  Once we were at the top, the views were stunning.  The water was a beautiful sea blue and there were multiple islands scattered around.  We took some pictures and a few minutes to enjoy the scenery before hiking back down to the bottom of the island.  We got back on our boat and relaxed for the rest of the evening.  And no…in case you were wondering, dinner was not good tonight either.