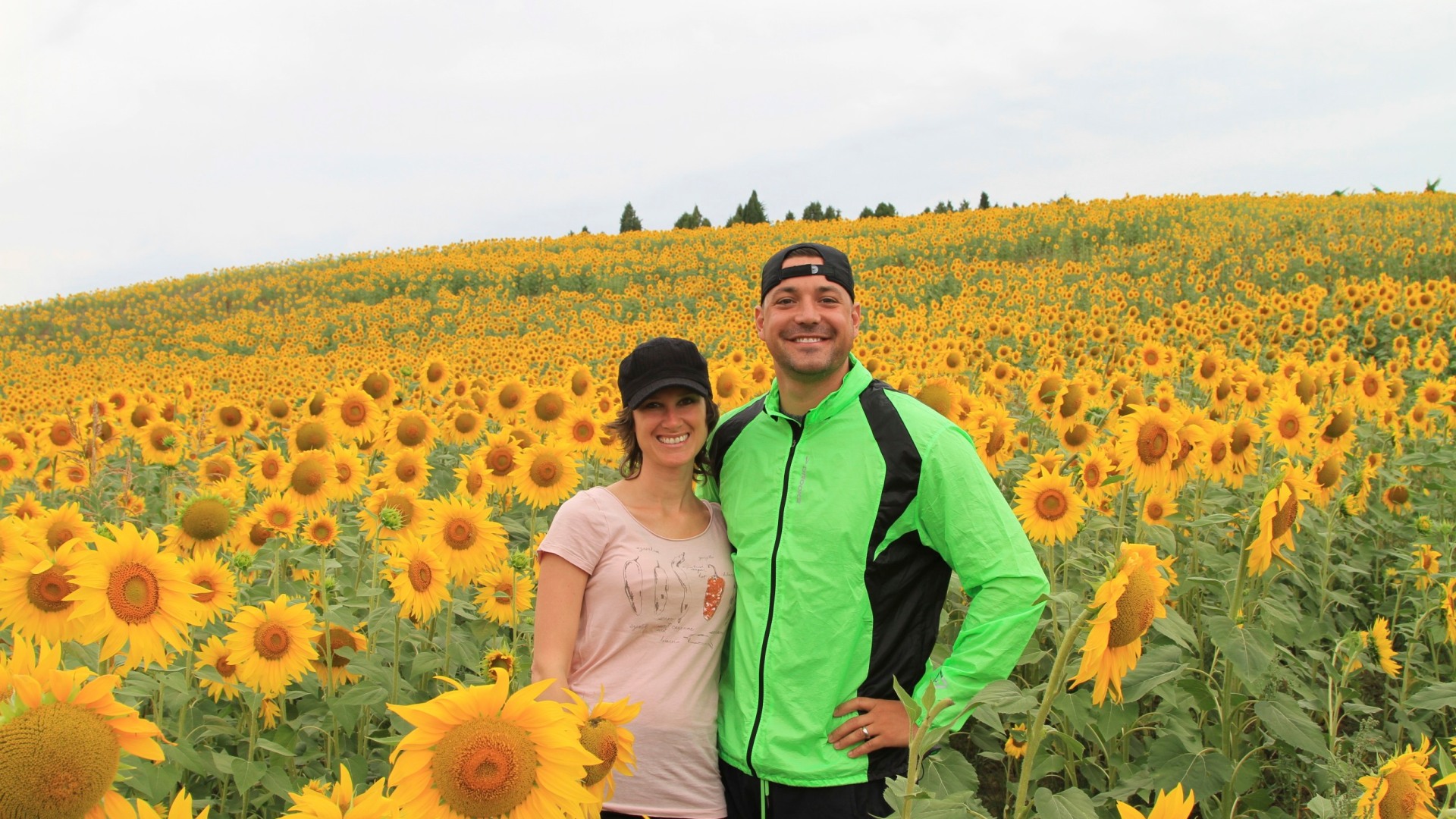 Sunflower fields forever….the sunflowers are in full bloom in Italy.  Fields and fields of huge sunflowers.  They use them mainly for the oil.  They are so beautiful…we can’t stop taking pictures of them!

Today we are visiting San Gimignano and Volterra (home of the vampires).  Our first stop in San Gimignano was for lunch at a place called, Osteria del Carcere (I don’t think they have a website).  It had about 4 tables downstairs and 4 tables upstairs.  We ordered a scrumptious salad made with mixed greens, sliced apples, nuts and goat cheese, then a variety of pate, a saffron goat cheese bruschetta and a side of classic Tuscany white beans.  We also ordered a local bottle of wine and when it arrived at our table, it had a glass oval-shaped bubble on top of it.  The waiter turned the bottle sideways and wine decanted into the bubble…then he poured the bubble of wine into our glass.  It was very cool.  In fact, we thought it was so cool that we ended up buying one before we left.  We had fun pouring our wine using this new tuscan toy as we ate and chatted with some people at the table next to us.

After lunch, we walked through the major squares of the town…there were quite a few tourists around.  We took pictures, ate gelato and weaved our way through the back streets.  We also did a lot of window shopping as there were boutiques lining the streets with various food, hand stitched aprons, kitchen towels, soaps, leather goods, paintings etc.

We spent a little more time than planned in San Gimignano which meant less time in Volterra.  By the time we arrived in Volterra it was getting dark…so we rushed into the major square to take pictures.  We briefly walked around the area and then looked for dinner.  It seemed like there were a lot less tourists…and this town was smaller.  We picked a restaurant with a table outside, perfect for people watching.  We ordered a house pizza, a homemade pasta, salad.  When we asked the waiter about which of two wines to order, he brought out a whole different bottle…we ended up loving it.  It was a local bottle called Vallino delle Conche-it also had the glass decanter attached to it.  Oh and we also indulged in a chocolate cake for dessert…

After dinner, we took a few more pictures and got back in the car for a long drive to the B&B.  We did not run into any vampires but did see an ad on one of the bulletin boards that sure looked like a female vampire.  When we got back, Giff was sitting on the bed and saw a black scorpion on the wall!!!  Ummm….aren’t those things lethal?  Giff managed to trap it in a glass and then wanted me to take pictures of it…I wanted that thing out of our room ASAP.  We could see its venom being released from the stinger in the glass…it was not so happy to be caught.  We went outside and threw it out of the glass…this was quite an episode being it was about 1AM.