We ate breakfast inside the manor house with two other couples,  one from Ireland and the other from Scotland.  We had fresh croissants, granola with yogurt and fresh squeezed orange juice/coffee.  Macaela then took us for a tour of the underground cellars which were particularly extensive being this used to be a wine estate.  Back then the grapes were dropped directly into the press through a shaft in the vineyards.  She showed us part of the old press as well as barrels and some older wine bottles.  She also took us through some of the tunnels where she pointed out names that had been carved into the stone walls from the soldiers who hid down there during the first world war.  The underground pigeon tower was also particularly interesting…it had many individual slots where each bird nested.  It was crazy to see this tower in such great condition from so long ago.  After our tour we played around in the vineyards taking pictures of the property before leaving for Bordeaux.

A few hours later, we arrived at La Corne which was our next B&B (we found this place on a site called, http://www.airbnb.com which is a great site for renting out individual apartments around the world).  It was about 45 minutes south of the city of Bordeaux but was on a small wine making property off the beaten path. It was a bit challenging to find, we knocked on a few doors looking for it and finally one neighbor who spoke only French, walked us up over a hill in the middle of the vineyards on a dirt road and pointed to a house. We hesitantly drove our car on the dirt road up to the house and found it.

The owners, Christine and Willy were so welcoming! After getting our stuff in the one bedroom apartment, the four of us sat outside at the picnic table with maps and a bottle of wine from their cellar (they make about 20,000 bottles of wine per year) and discussed the local area.  There were villages to visit, wine to taste, a beach town to see and bike paths nearby.

After mapping everything out, we went down the street to grab a pizza and brought it back to sit and enjoy our surroundings. After dinner, we joined Christine and Willy for a drink on their porch.  We brought out a bottle of Talisker single malt Scottish whiskey (from our trip to the Isle of Skye)…and they brought out a bottle of 25-year old Armagnac (a brandy made from in a region 2-hours south of them).  After a refill or two…we called it a night and went to bed. 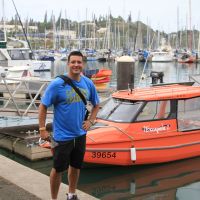