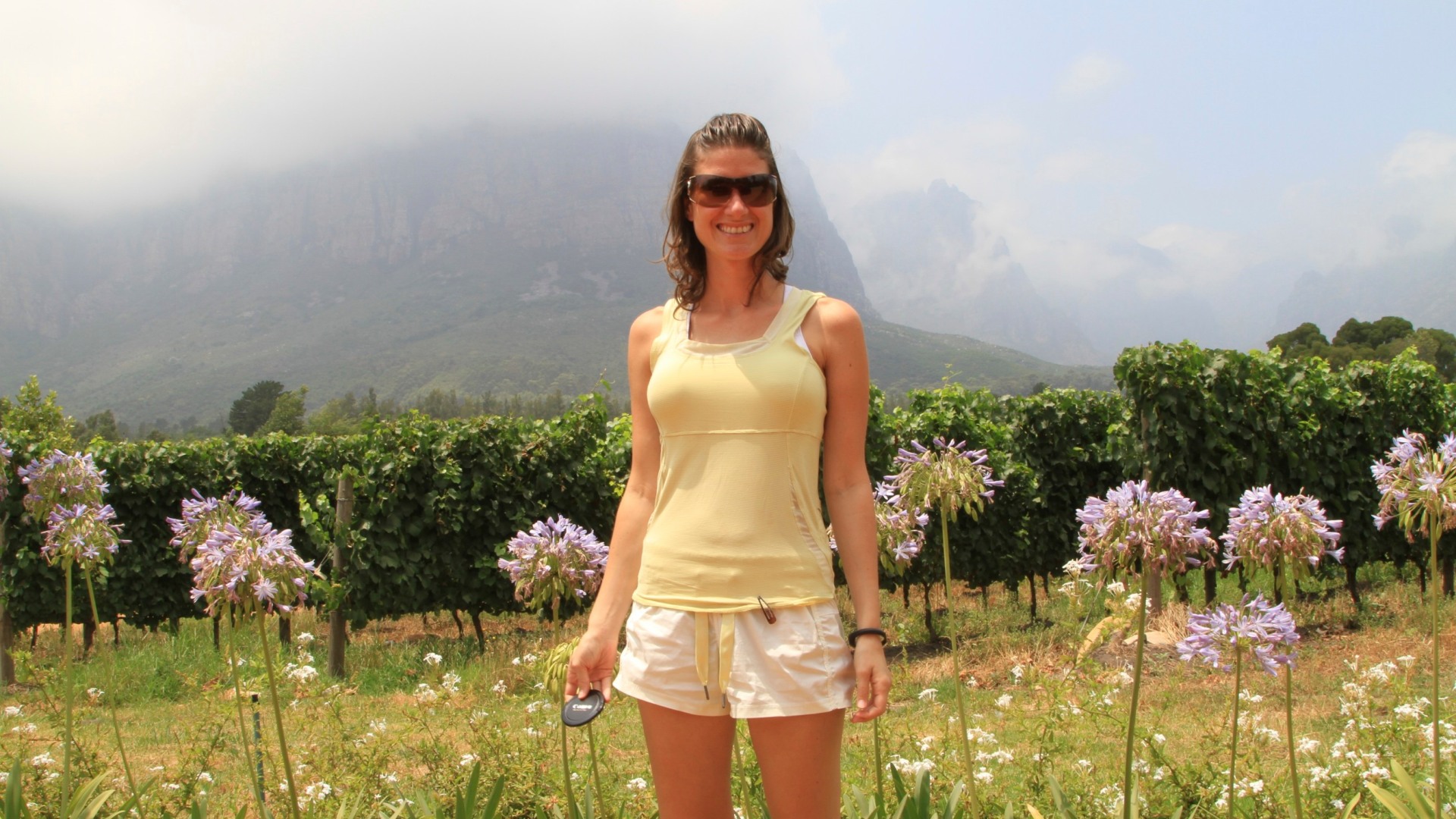 After another breakfast in the vineyards, our first winery of the day was Tokara (www.tokara.com). The estate was beautiful…we are noticing there has been a lot of money going into these Winery estates. They seem state of the art with great open spaces for tasting, restaurants, views and gardens. Tokara was no different…they had a huge area to see their wine tanks/barrels…and some cool art work in the front of the building. We tasted their wines and asked questions as we took tasting notes. Surprisingly, we found ourselves liking another white…it was the Late Harvest Sav Blanc, 2010.

Next up was Thelema (www.thelema.co.za) Mountain Vineyard. Again, as we drove through wine country the scenery was really just breath-taking. Thelema was known for their reds which we were excited about. After tasting their wines, we decided we really liked the Thelema Cab, 2008 but also they had a wine called, “The Mint” which was a 2009 cabernet…the grapes grew near Eucalyptus Trees which gave a hint of mint to the red wine. We tasted it and definitely tasted the mint, which was something we hadn’t experienced before. Our favorite white there was the Sutherland Viognier Roussanne, 2009. We had a good time chatting with the people working there about their wines…it was nice to find some reds we liked.

As we drove down the long gravel farm road to Oldenburg Winery, (www.oldenburgvineyards.com) we literally pulled over to take pictures…gorgeous vineyards for miles on rolling hills with mountains in the background and a layer of fog lingering. The Estate was beautiful and had a great patio overlooking their vines while drinking their wine. We chatted with the women who was so nice and told us a bit about the area while pouring her wines for us. She also taught us a phrase in Afrikaans (the common language in South Africa) which is, Dankie, dit was baie lekker-Thank you, it was very nice. She also talked with us a bit about how the government was taking property back from the current owners to “re-distribute” the wealth…she said it was not going so well…a lot of politics and resentment. The white wines we were tasting were the winners…Chenin Blanc, 2011 and the Chardonnay, 2010. We told her we were finding out how great the whites were here in South Africa but in general were still looking for great reds. The property next door was a small wine farm called Rainbows End (www.rainbowsend.co.za) but because it is so small…only does tastings by appointment. She called them for us and luckily one of the girls who usually does the office work said she could do an informal tasting for us…we of course said yes please.

We drove down the gravel road, literally in the middle of the vines so happy to be where we were in the world and saw a girl jump in a pick up truck and pointed to us to follow her…we did and finally arrived at a barn-like building. We got out and she opened the barn to have us peak in at their stainless steel tanks, she explained their wine making prices before we all continued driving a bit more to another small building. The little building had about 20-30 barrels full of wine with an air conditioning unit in place to mimic the temperature of a wine cellar. Because the door had a little crack at the top…it was uneven with the frame, she tucked in a thick blanket or coat to cover the crack and keep the cool air inside…classic. We walked through the garden and up to the deck where she opened quite a few bottles of red…they didn’t even make whites. We tasted the reds which were on the warm side…it was hard to tell if they were any good because hot red wine is not so appetizing. We bought the Shiraz, 2010 and decided once it was refrigerated…maybe it will be a good one.

We were told how great the La Motte Wine Estate (www.la-motte.com) was so made our way over there to see the gorgeous property…very elegant. It had huge white historic buildings…a restaurant, large wine cellar and big tasting room. After walking through their barrel room, we sat at a table which was set up for tasting and sipped on our wines as the guy working their talked to us about how their wines were made. Our favorite was the La Motte Millennium Shiraz, 2009. We bought our bottle and walked back through the garden area stopping to take a picture of a really cool fountain with the tall mountains behind it…

For dinner, we stopped in the town of Franschhoek which was the region we were in all day…it had a cute little town full of shops and restaurants. We actually stopped at the doctor’s office while we were there to ask for more malaria pills. We will soon be going on our safari and realized we didn’t have enough pills for both of us. The doctor was super nice and after asking a couple questions…wrote a prescription to cover both os us. We saw a little bar/restaurant with people sitting at the few tables outside near the doctor’s office and thought it looked good. We ordered a pizza and realized as we were sitting there that the food would probably not be good…and it wasn’t. We should have gone somewhere else but were super hungry after wine tasting all day, so settled for basic bad bar food.

After dinner, we drove back to Stellenbosch where we were staying and settled in for the evening. We have to be up early tomorrow to get over to Cape Town.