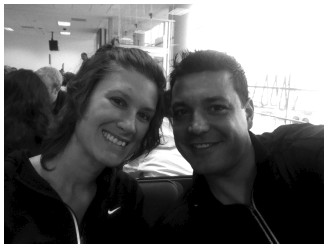 The air was chilly, people were in warm coats and hats when we arrived into the city of Cusco.  We had heard that many people feel altitude sickness not only on the Machu Picchu hike which goes as high as 13,799 feet but also Cusco itself which sits 11,200 feet high.  We figured…we’ll be fine, how bad could it really be?  Walking out of the airport, we saw our name written in big letters on a piece of paper.  We went over to the man holding it, introduced ourselves and got in the car.  He drove us 20 minutes away to our hotel.

Once we arrived, they had us go into the small hotel lobby and have a seat while they brought our luggage to our room.  There were a few other people sitting there as well and the hotel owner introduced himself and discussed how things were organized as well as described the area a bit.  He explained that whenever we wanted to go into the town center or come from town, that they would have a complimentary car waiting for us within 10 minutes.    He also explained there was complimentary tea available at all times (including the well know coca tea) and gave the hours for the complimentary breakfast…noting that if we were leaving extra early and would miss breakfast, that they would pack us a free lunch bag and put on a pot of coffee.  We were quite impressed with the service.  If you are taking a trip to Cusco, we strongly recommend them:www.torredorada.com

After our briefing, we saw our room was sufficient and had a shared living area to watch TV.  We grabbed a cup of tea, freshened up and headed straight to the center of town.  We had to check in with our tour guide, Llama Path ( www.llamapath.com).  Once we arrived at the tour office, we were greeted by a llama path representative who had us sit down, showed us the list of others hiking in our group and went through a checklist of what we already had vs what we needed to rent.  He of course took the remainder of our payment and told us to be back in their office tomorrow night at 7pm for a team meeting.  Excited and anxious for our trip, we left the office and started to explore the city of Cusco.

We had been told about a lunch place called, Heidi’s serving a fresh organic and well priced lunch.  As we made our way there…we stopped in the main square of town…admiring the architecture and fountains.  There was definitely a Spanish influence.  The buildings were built right next to each other with brick colored rooftops, hanging black wires connecting the electricity and the streets were made of small pebbles different from the cobblestone in Europe.  Even the walls were made of huge rocks.  We reached Heidi’s after walking uphill on a street so narrow a car could barely squeeze through.

Heidi’s was a small restaurant upstairs.  The pre-fix menu was $9 ea and included a starter, entrée w/salad and dessert.  We ordered a cup of tea to start…what exactly is this coca tea anyway?  Tea made from the leaves that make cocaine?  But not only is it legal here but highly suggested to ease altitude sickness.  The leaves have a medicinal effect and are very common in both Peru and Ecuador.  Giff ordered the tea straight meaning only leaves and hot water.  I ordered one called happiness which mixed the leaves with other herbs such as dandelion and mint…all in its natural form…no tea bags.

As we waited for our lunch we both noticed we were feeling a bit light headed…it almost felt like we were lightly buzzed from drinking but hadn’t had any drinks.  Was it the tea or the altitude?  Giff started feeling kind of sick, very hot and felt his heart beating fast…it lasted briefly and then he was fine.  We ate our lunch which started with a cous cous salad served with a spicy avocado sauce and a piece of mint…it was fresh and healthy.  Our next course was a cup of carrot and coriander soup which was tasty and warm.  The entrée was shredded chicken in an orange colored sauce, sliced beets, rice and a small salad.  We were careful not to eat the raw lettuce and mint even though it was tempting…it was not worth getting sick.  They say, when in this country to only eat what you peel yourself or boil.  No raw veggies allowed and that is mainly because of the sanitary issue as well as the water not being safe to drink (at least not for foreigners).

After lunch we continued exploring the area.  We took pictures and wandered around the local markets both for crafts and various foods.  The crafts were things like hand-made gloves, hats and blankets made of Alpaca wool.  There were hand-made chessboards amongst other gadgets.  We saw a dance show being performed by locals in their bright-colored costumes on the street as a crowd of people gathered around.  There were locals everywhere anxious to sell their goods which may have seemed pushy to some tourists but as we looked closely saw how truly tough these people were.  We specifically admired the women as they carried their loads whether goods or babies on their backs via a blanket tied to them as we would use a backpack.  There skin was thick like leather from the harsh peruvian sun beating down on them.  These women…seem so strong…it’s actually quite impressive and humbling to get a glimpse of what daily life is like for them.  We saw a kid singing on the street with a cup beside him for handouts and another child, maybe 2 yrs old sitting on a table in the middle of raw meats such as cow tongues and livers at the market beside her mother who was trying to make some money for her family.

After much walking around in the cold, we realized we really weren’t feeling well.  We both had bad headaches and were really tired.  It felt the way a bad hangover feels except we hadn’t been drinking anything.  We specifically were avoiding alcohol as we were told alcohol contributes to the altitude sickness.  We found a place in the main square for dinner, the Inka Grill.  We told the waiter we weren’t feeling well and had just arrived today.  He quickly brought us more coca tea.  We ordered food, a beef stir-fry which they served with fries and llama steak which was fairly good…similar to venison, although we were noticing many of the meats were being overcooked.  Our headaches weren’t going away and we realized…this was altitude sickness.  They told us we would feel better tomorrow.  We had our hotel pick us up and we went straight to bed.