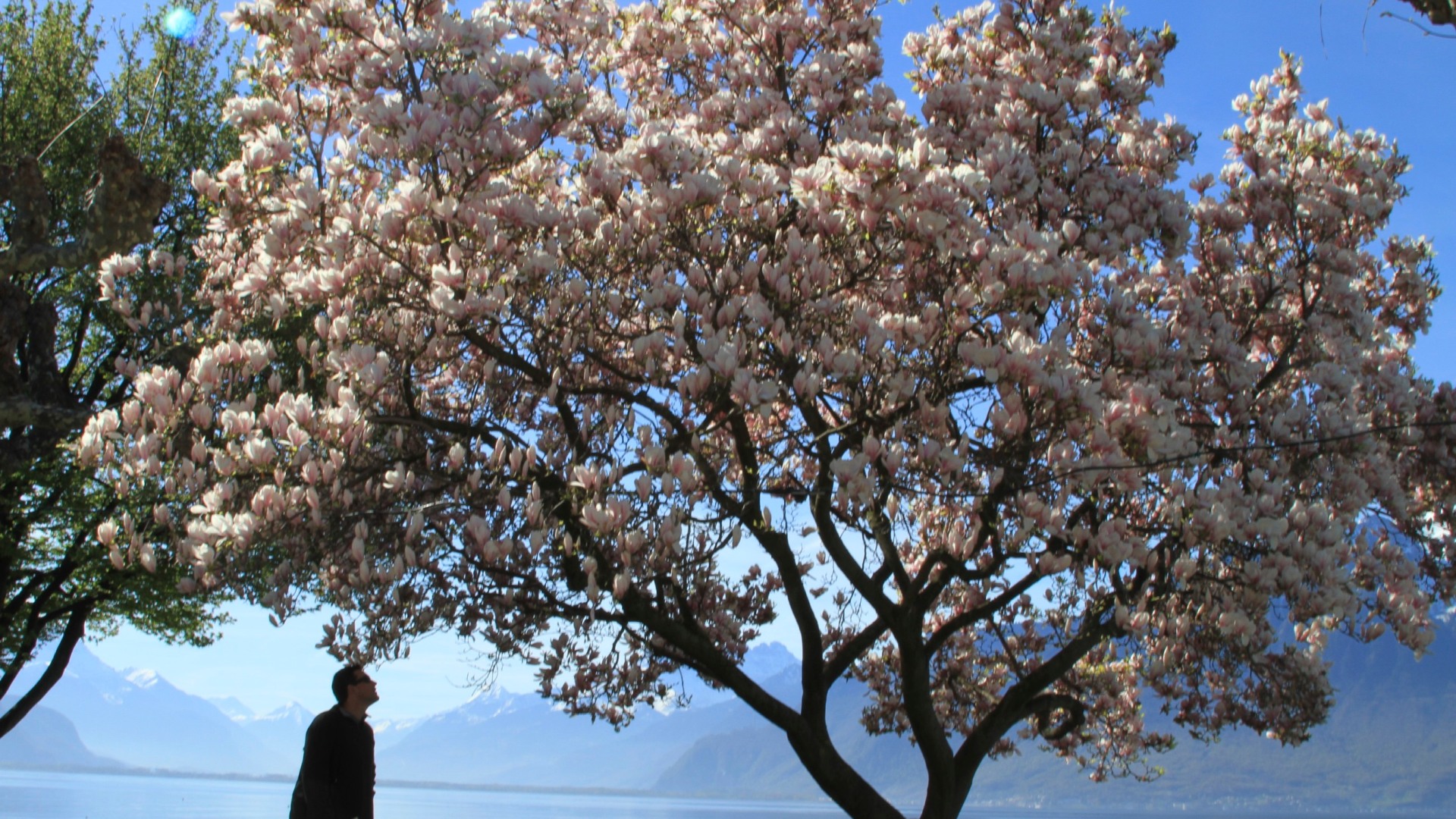 We actually slept through the night, waking up at about 5AM.  We started our morning on the patio with a coffee and a chocolate croissant-Yum!

We drove down the mountain and back towards Lake Geneva.  We arrived in a small town called Vevey.  It sits on the lake surrounded by mountains and has those trees we love and see everywhere lining a boardwalk.  We walked around the old cobblestone streets, looking at the shops and taking pictures on the water.

Next stop was Gruyere where we found La Maison Cheese Factory.  We were excited to take the tour through cheese making.  They had a big restaurant to walk through and then the tour counter in the back.  We paid for two tours (7 CHF each), they gave us a hand held audio wand and a pre-packaged tasting of their cheese from not aged to aged.  Unfortunately we were disappointed with this tour!  It had the components and ideology to be a good tour but the execution was just not there…it felt kind of cheap.

After walking up some steps there was a large wall with fun facts about cheese making and each fact was numbered so one would enter it into the audio wand to listen to the information.  They also had long silver pipes sticking out from the floor that you pull on and sniff.  There were various scents to smell that may be in the fields that could impact the cheese taste.  After walking along one side of the wall, you walked along the other side of the wall doing the same thing.  The narration was all done via a cow named Cherry.  Yes, I know…that is pretty “cheesy”.

Then you walked into a room where the windows were all glass and you could look down into where the cheese was being made.  Of course there aren’t always people making cheese at the time you enter but you could see all the machinery and there were videos showing the process.  The tour was done and you could peer into a big room where each huge wheel of Gruyere cheese was aging.  What would I have done differently?  I would not have Cherry the cow telling me about cheese making for starters.  I would have the tour actually walk through the dairy factory area (of course closed off so people couldn’t interfere with the process) and I would have a tasting room be the end of the tour where someone would have us try various types without telling us the aged months so we could guess for ourselves the difference in taste.

After the cheese tour, we felt it was only right to venture into the next town where there was a famous chocolatier.  This company was called, Cailler ( http://www.cailler.ch/en/Home.aspx ) chocolate which is a Swiss chocolatier making chocolate since 1819!   We purchased two tour tickets and ventured in hoping for a better experience than the last tour.  A women asked us if we were ready and told us when the walls or doors open, go into the next room.  She then put us into what seemed like a huge elevator and the doors shut with only Giff and I inside.  A voice started talking to us about the history of cocoa.  The elevator went down and the doors opened to another room filled with fake plants, props and lights.  We continued to listen to the ancient story of cocoa and walking from room to room as different doors and walls unveiled the next space.

After the storytelling portion of the tour, we found ourselves in the factory portion.  There were bags and bags of cocoa  beans from different parts of the world with information telling us the difference in the taste and characteristics of the beans.  There were also various huge bags of nuts they used in their chocolate as well as a bin of cocoa butter you could touch.  There were so many fun facts in this room telling you about the plant and the crops and how the chocolate is made etc.  We learned that Cailler is one of the only large manufacturers who use fresh milk from cows (delivered daily) for their chocolate’s creamy texture.  Most others use powdered milk.  They also had a live feed showing a couple safes.  In those safes were the secret recipes of the chocolate that less than one handful of people know the code.  As we continued walking we saw the production line.  It was a machine that started with forming the chocolate into its shape, then enrobing it in additional chocolate, cooling it and wrapping it…then at the other end was a basket of these chocolates to eat!

The next room was another window into the chocolate factory…with workers busy at work.  Before the tasting room, was a hall with papers on the wall.  The question stated, “When is it chocolate time for you?”  They supplied papers and pens so we wrote, “With a big glass of vino” and stuck our paper on the wall with the others.  And finally we were approaching the tasting room where we could smell rich chocolate and see the piles of individual chocolates on plates waiting to melt in our mouth.  Right before you walk into that room is a huge picture of a human head and directions on exactly how to properly taste chocolate.

Then was the tasting.  The counter was a square shape and it had plates loaded with chocolate pieces.  Milk chocolate, dark chocolate, truffles, bars you name it.  We gorged ourselves of course…it was our duty to taste so many right?  And then left the tasting room only to find a huge room of packaged chocolates for sale.  Walls filled with chocolate bars…we bought many and if we see you when we are back in CA, OH and NY at the end of April…we will give you a taste as well.

With our bellies full of chocolate we ended our day in a lakeside town called Montreaux.  We walked through the small city which also had a boardwalk on the lake and cobblestone streets in the old town.  We sat down at a cafe outside on the sidewalk, ordered a beer and talked with a group of people from Germany before heading back to our place for a goodnight sleep.