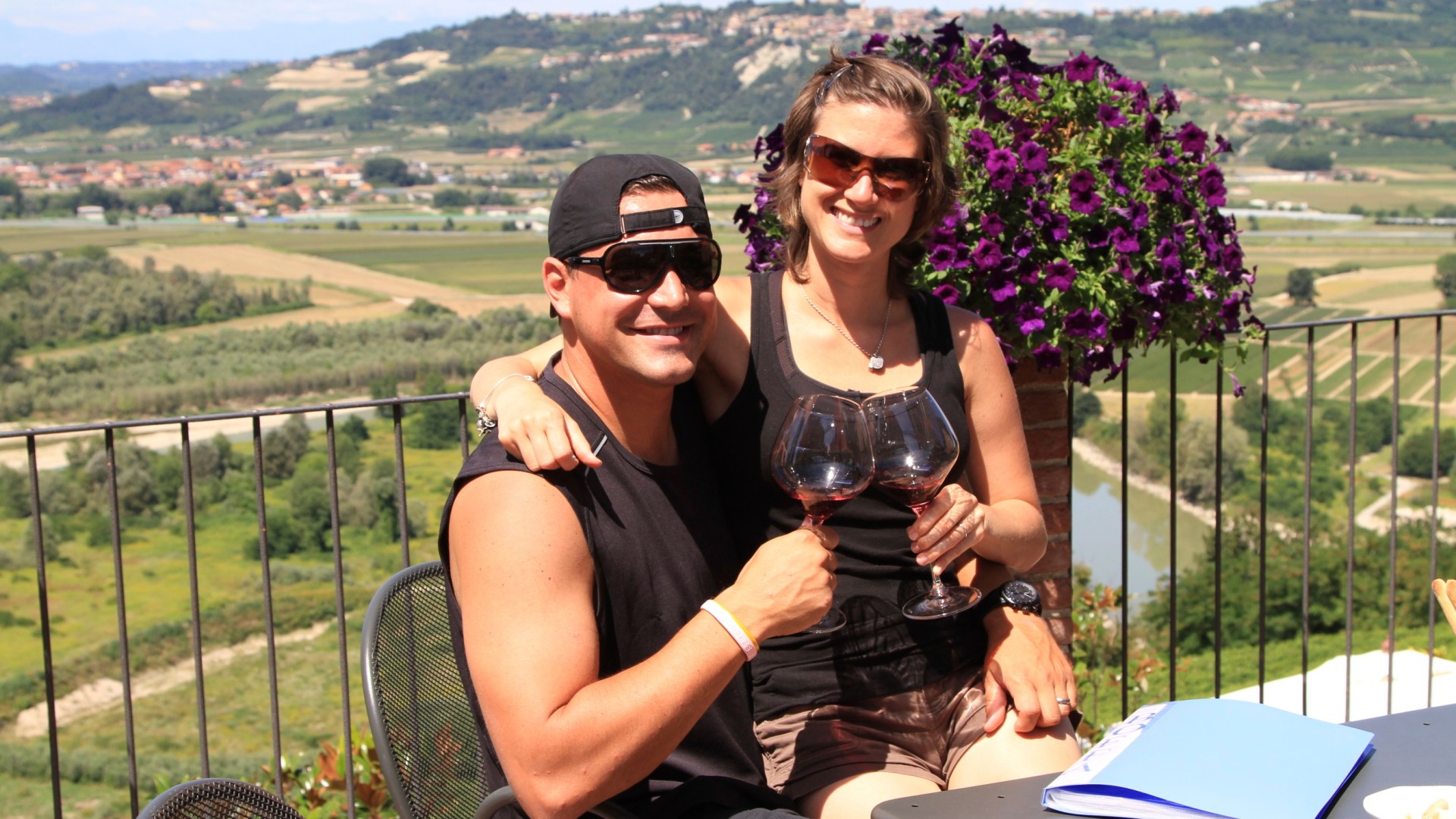 As we drove through the area of Piedmont we looked around pointing to which house we would like…is it the one in the bottom of the valley surrounded on all sides by perfectly groomed vines or the one at the top of the mountain looking down at all of the valley?  We have seen a lot of vineyards in a lot of countries but this area has some of the most beautiful of them all.  To add to the beauty…the grapes were starting to turn from green to a deep purple…we tasted a couple off the vine and they were already sweet.

Barbaresco was a darling village full of wine shops sitting on a hill surrounded by its vineyards.  After a quick visit to the tourist office, we walked into a cathedral that had been turned into a wine tasting building.  The ceilings and walls had ornate detail in both the paintings and woodwork, the way one would expect a church to look like…but inside were also numerous bottles of wine and a counter in the back of the room for tasting.  This town makes a living on wine…everywhere we turned was wine….wine…wine.  We tasted a couple of wines and chatted with the women who educated us on the various regions in the area.  She talked about the typical wine in the area being less “oaky” than typical CA wines.  We left looking for two other tasting rooms that had been recommended.

The village was basically one long street a few blocks long.  We saw the place we were looking for, Cantina Boffa (www.boffacarlo.it).  We picked out a couple of bottles we wanted to taste noting in the Chianti/Umbria area tastings were free vs Piedmont…the tastings were all at a charge more like the Napa Valley area at home although not as expensive.  They had us sit on the back patio which had sweeping views of the vineyards while we sipped our wine and relaxed in the sun.  They brought us some complimentary cheese and crackers and had us taste an additional wine before we purchased two bottles and went on our way.

We stopped in two additional tasting rooms, the first was Gigi Bianco (www.gigibianco.it) where the owner sat down and discussed her wines with us explaining the business had been in her family and was handed down to her.  We liked what we tasted and bought a bottle although we realized Barbaresco wine is not exactly a bargain wine…but tasty all the same.

The last wine shop we visited preferred we don’t mention their name but they spoke no English…not even a drop and it was quite comical nodding our heads as he spoke fast and assumed we were picking up some of what he was saying…but we weren’t.  It was very fun though tasting the different vintages.  He would write down on a piece of paper a year like 1995, he would disappear for a few minutes and come back with a glass of wine he had just gotten from the tank of 1995 red wine.  We would taste it as he talked about it in Italian and we nodded our heads, and then the whole scenario would repeat.  He would write down another year like 1990, disappear and be back again with a different wine.  Although we were having fun…we had an appointment with a vineyard in another town and were already very late…who knows how many years he would have gone back but we had to cut off the fun and head out of Barbaresco.

We were about 45 minutes late to our appointment in the city of Bra at a winemaker called Ascheri (www.ascherivini.it).  Thankfully, they were ok with our tardiness and jumped right into our tour.  One of the managers walked us through the warehouse showing us the machinery, huge metal tanks and dozens of barrels both the huge barrels and smaller ones.  He talked about their wine making process, the local grape varieties and impact of different soil on each vineyard.  He then walked us into the factory portion of their warehouse where they were actually bottling one of the white wines.  He talked us through what the machine was doing pointing from the start where the machine turned the bottle upside-down (to make sure nothing was inside) to the nitrogen placed in the bottle so that when the wine was being placed inside, it would not come into contact with oxygen.

After our full private tour, we followed our guide into the tasting room where they had a plate full of local cheese and the city’s local sausage which dates back many generations and is found homemade from secret recipes throughout Bra.  We picked a few wines to taste and he opened each bottle for us to compare and contrast.  We were a bit buzzing by this point…it was a very long day of tasting local wines!  We bought a few bottles and then walked around a bit to see the city.

For dinner, we just stayed in enjoying the property at our B&B and munching on the cheese and fruit we had purchased.  Tomorrow we will drive just about 30 minutes or so to our next B&B to stay in the Barolo area for a few days.