We checked out of Bologna and into our hotel in Parma fairly early today.  We got all our stuff unloaded in our room and set out to see the town of Parma.  Parmigiano- Reggiano…here we come!

Parma had a small town feel with its piazzas, amazing architecture, food for days and the street performer added to the ambiance with his music.  We explored the stone streets, taking pictures and window shopping.  We stopped in the largest square for a light lunch of salad served with their world-renowned Parma ham.  There seemed to be quite a few specialty shops selling Parmesan cheese, local meats and other similar products.

We couldn’t resist buying some real Parmigiano-Reggiano cheese and of course Giff’s mouth was watering over the Parma ham which some say is the top proscuitto of the world.  We chatted a bit with the various shop owners while collecting our meat and cheese.  One of the shops we enjoyed the most also had a restaurant that looked really good…so we made a reservation for later tonight and went back to our hotel to relax for a few hours before coming back for dinner.

Our dinner at Tratoria Sorelle Picchi was very good.  Not only was the food good but we had a great time talking with the restaurant manager, Daniel, throughout dinner.  We are noticing Italians are not only friendly but they love practicing their English with us! We sat at a table outside along the street, perfect for people watching.  We ordered two homemade pastas, one was a trio of stuffed ravioli (pumpkin, ricotta with herbs and mushroom) and the other was one of our favorites of the trip.  It was linguine served with slivers of parma ham and wild mushrooms.  We also ordered a salad served with Modena balsamic vinegar which is nothing like the stuff we have at the grocery back home…it is a rich syrupy, sweet goodness that really makes the salad great.  For dessert, a homemade tiramisu…the cream was so good…one could easily eat it plain straight out of the bowl.  We sat for over three hours sipping our wine and tasting our food while happily living in our moment of bliss.

It was past midnight when we got finished with dinner so walked back to our place and went straight to bed.  We have a food tour to go to in the morning! 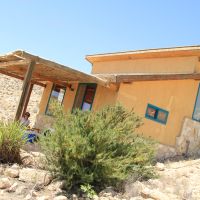