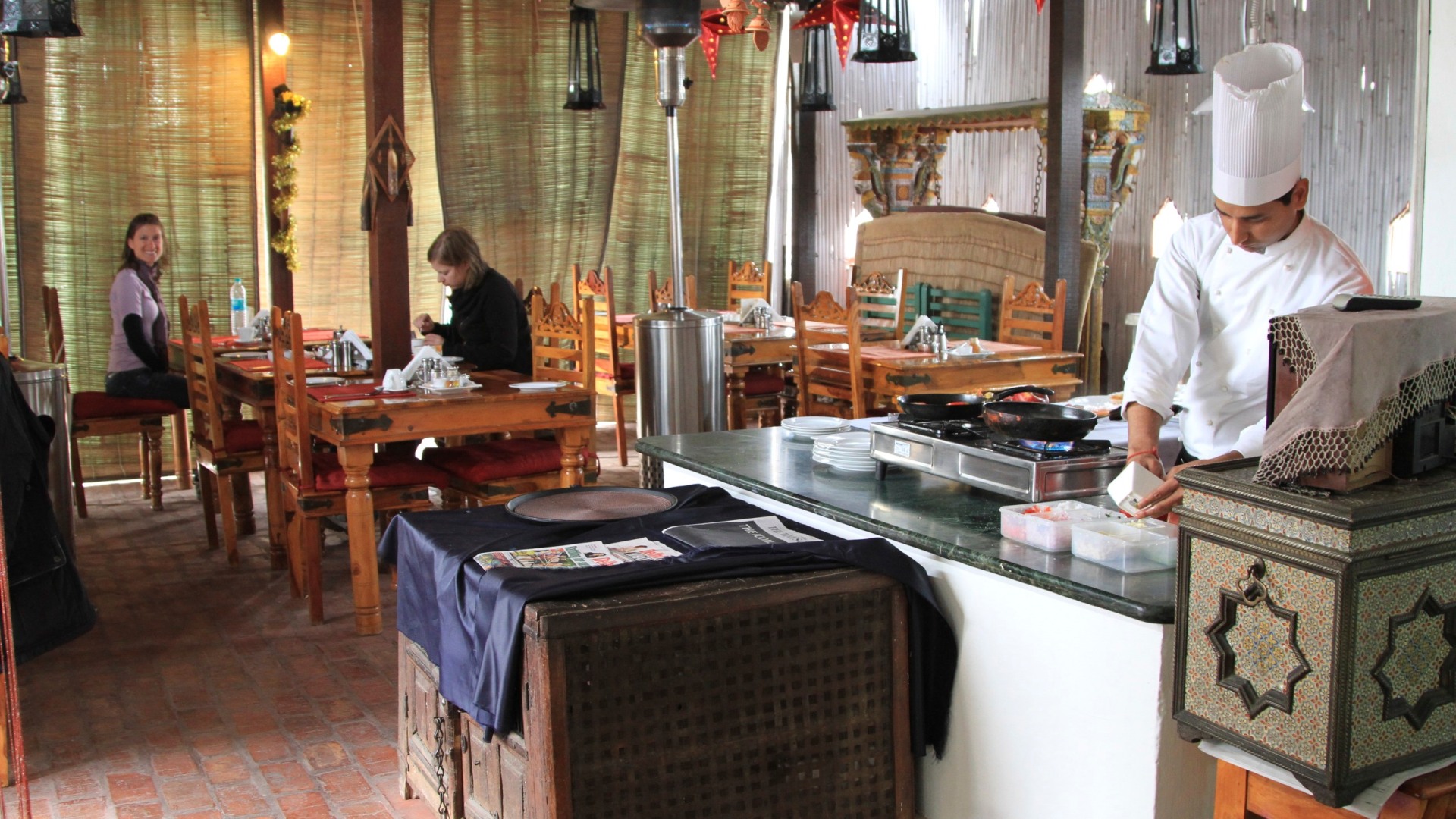 We were pleasantly surprised with the breakfast at our hotel (Shanti home, www.shantihome.com ).  It was located on the top floor and had a chef making breakfast to order…eggs, grilled veggies, fruit, special Indian dish of the day and a crepe filled with yumminess.  Oh and of course the authentically made hot chai tea…very creamy, sweet with dried spices.  After breakfast…we walked down to the front desk and they gave us a map of the area, as well as their opinion on what we should make a priority to see since we have today and tomorrow before we leave for the next city.

Our driver arrived and we were on our way to the first stop…QUTB Minar, a UNESCO World Heritage Site.  The driver dropped us off and told us where to meet him when we were finished.  We walked onto the property and purchased a ticket as well as headphones for a self-guided tour.  The first thing we noticed was the tall tower in the center…it was 237.8 ft tall.  It was first built-in 1192 and is the tallest minaret (Islamic mosque architectural feature) in India.  There were also several other buildings and ruins surrounding the tower, so Giff and I took our time listening to the guided tour and walking through the complex.  The buildings were made of red sandstone and marble and had intricate carvings and verses from the Qur’an.

We walked back across the street wondering if we would be able to find our driver whom we just met, amongst the hundreds of other cars…he was also keeping an eye out for us and we found him pretty quickly.  We were only in the car for a couple of seconds when our driver hit a motorcyclist!!  We were pulling out and the motorcycle was pulling in and we collided.  The motorcycle driver went down to the ground and the motorcycle skidded across the street.  A bottle of alcohol also went flying…our driver said the guy was drinking.  The guy seemed ok and our driver took off stopping a bit down the road to check and see if there was damage on his crappy car.  The traffic here is crazy…there are so many moving things on the road, from cows to rickshaws to tuk-tuks to cars, and many many people of all ages.  And for the record, there are no lanes for the vehicles to stay within…it is free-game out there.  Basically, the one word that would really sum it up would be…utter chaos (ok that was two words).

After our minor accident…we drove over to the Baha’i House of Worship, otherwise known as the Lotus Temple.  The Baha’i faith emphasizes the spiritual unity of all human-kind.  This temple serves as the “mother temple” of the Indian subcontinent.  There were many people all walking in the same direction we were up towards the entrance.  Once we got close…we all had to take our shoes off and walk the rest of the way without shoes…not ideal (good thing we had socks on).  We finally got to the entrance where we stood with a big group of people, and the 2 women working the front doors explained both in Hindi and then in English that the temple was a place for all people to pray/meditate to whatever they believe in…all religions were welcome.  They said to please be respectful and remain silent while inside and then when ready, to exit out the other doors.

We got inside the large circular open hall and saw there were several long benches or pews the way you would find them in a  church, but the decoration inside was not specific to one religion.  We thought it was very cool that all beliefs were welcome under one roof and the architecture was also impressive.  The outside was made up of 27 free-standing marble-clad petals arranged in clusters of 3 to make up 9 sides.  Each side had 9 doors, and the whole surface was made of marble.  It looked like a giant white flower and at its base was blue water.  The architecture reminded us of the Sydney opera house.  We sat inside the silent peaceful room full of people saying a prayer and joined in with our own.

After the Lotus Temple, the driver took us through the crazy jam-packed traffic to the Khan Market which is a well-known market place housing many restaurants and shops within a couple blocks.  We walked through the crowd of people in the small streets to a place called The Kitchen for lunch.  It was interesting to see a guard standing outside each place…even restaurants…kind of strange.  In the Kitchen Restaurant we saw a chalk board on the wall stating they were on number 253,161 khaosuey served.  We had no idea what exactly khaosuey was but we wanted some!  We each ordered a bowl of it and then shared a super spicy curry.  The Khaosuey was a soup, it had noodles at the bottom and the broth definitely made with coconut milk was both spicy and sweet.  There were layers of flavors and it was accompanied with five little cups of things like dried crunchy onions to place on top.  We both enjoyed the soup but the curry was nothing special…its main flavor was hot sauce instead of layered heat using the renowned Indian dry spices.  To end the meal, we drank our hot masala chai tea.

After lunch, we walked around a bit more through the market stopping for some crunchy cookies at a bakery and peeking in at a few of the shops before we ran into Chokola…a chocolate shop…duh!  We got past the guard and up the stairs to find chocolate everything on the menu…chocolates in display cases and all kinds of hot drinks made with chocolate.  We ordered a couple of coffee/chocolate drinks and a few chocolates…this should give our sweet tooth a fix for the day!

The “market” seemed to have more restaurants than anything else…and since we already ate, we found our driver who got us over to the train station.  We had booked hotels in various cities in India, but had not booked the transportation.  Our hotel said the best way to book it is in person, so we had the driver bring us there.

The station definitely felt a bit dicey…the kind of place you have to pay attention and watch your back.  We figured out where to go…straight upstairs even though random people were trying to point us in the wrong direction.  Once upstairs we saw a room full of tourists all sitting in chairs along the wall forming a line.  It had a DMV feel…there has to be a better way…this could literally take hours!  We grabbed a piece of paper to fill out our train ticket requests and sat down in line chatting with other English-speaking tourists who said the line was actually moving fairly quickly.

About an hour later, we finally reached the desk and they assisted us in getting tickets.  The guy working there asked us whether we wanted first class or second…we asked what the difference was and he said really it was only getting air conditioning vs. not, and since it was winter…it didn’t really matter.  Believing him, we went ahead with the non first class tickets which were really dirt cheap.  Some of the tickets were sold out so we didn’t get the perfect time slots but went ahead and purchased them so we would have a means of getting from one place to another.

Back at our hotel after our long day, we decided to go to dinner at the hotel restaurant.  The waiter was very nice and after looking at the menu he suggested we go with their multi-course option to showcase the highlights of Indian cuisine.  As we looked at the wine menu we saw India does in fact make red wine…who knew??  Tempted as we were to order a bottle of wine from a country we are familiar with…we also wanted to know what Indian wine had to offer.

The food was very good…after our first course of soup, and our second course of fish, the main course was served on a huge silver platter and five little dishes made with all kinds of flavors and colors accompanied a bowl of rice.  The wine was not our favorite but it was drinkable and we really enjoyed tasting so many different dishes on our first full day in India.  The naan bread by the way was being made traditionally in a charcoal oven.  It was a deep hole with charcoal and fire inside…the naan was placed down in the hole and monitored by the cook until it was perfectly bubbly and delicious.  Dessert wasn’t the highlight of the meal but we were already full by the time it came anyway.

After our leisurely dinner, we retreated back to our room for the evening. 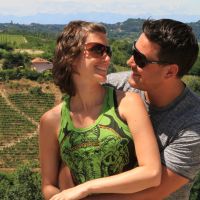