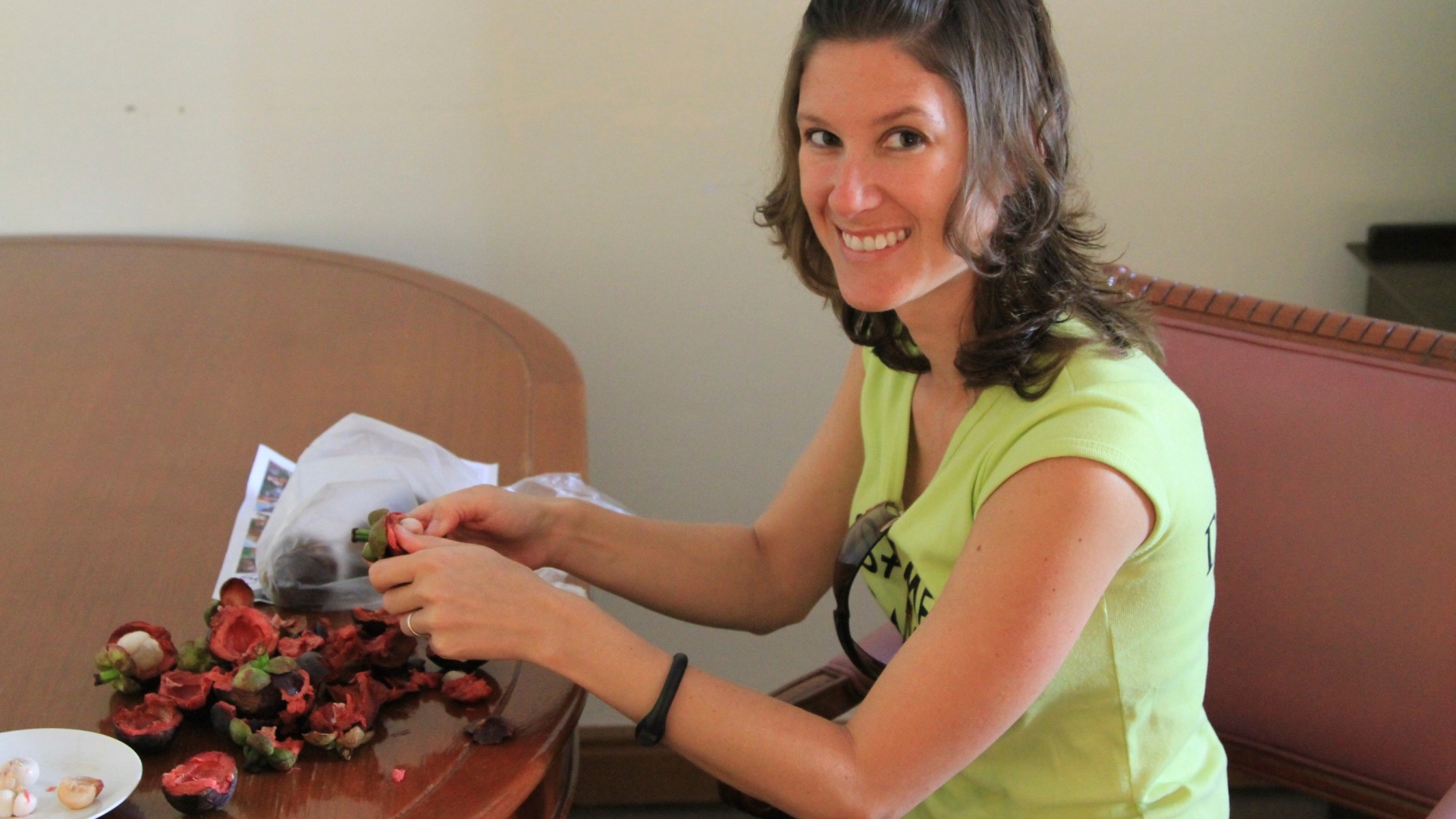 It is our last day in Bangkok, we could easily spend more time in this city…we just couldn’t get around to see all the different areas here!  After starting our morning peeling and eating a bunch of mangosteen fruit, we decided we needed to see some of the historic and religious buildings in Bangkok.  We took a tuk-tuk to the river dock, got a ticket and stood in line for the water taxi.  The taxi was fairly big…more of a ferry-boat and there were tons of people onboard.  We found seats and watched the sites as we floated down the  Chao Phraya River.  We got off the boat at the Wat Arun (The Temple of Dawn) but first walked past the entrance in search for food…we hadn’t eaten yet.  We found a little place and ordered a few dishes to eat while enjoying the air conditioning…it was extremely hot outside.  We had a soup as well as a couple of stir-fry dishes to energize us before our temple sight-seeing.

The Wat Arun sat right on the edge of the river and as we got closer to the main tower or pang as they call it, we realized the intricate details used to create this beautiful Hindu temple.  The tallest portion represents Mt. Meru (the center of the cosmology world in Buddhism) and the other four Pangs have additional Buddhist symbolism.  There were a couple very steep stairways to climb to get closer to the top of the main temple.  We slowly climbed as far up as we were allowed to go while appreciating each porcelain piece that had been placed into the design of this temple.  There were what looked like porcelain saucers and other pieces of porcelain in all kinds of designs laid into the building.  It was very artistic and resourceful…this temple is one of the best known landmarks in Bangkok.  We took many pictures and stopped for a few minutes to gaze out at the view of the river before getting back on the water taxi to cross the river to the next temple.

After a short ride across the river, we found ourselves walking by several vendors selling their goods and took a small detour into the local market…which seemed like a rundown market with smells to wake anyone’s senses, and I don’t mean that in a good way!  We quickly left the stinky market and walked onto the grounds of the Grand Palace which was built-in 1782.  It was home to the Thai King for 150 years, but is now only used for ceremonial purposes and tourists.  There were all kinds of buildings within the temple walls and larger than life statues all richly decorated in gold and other bright colors.  This temple also used porcelain pieces inlaid in the building for decoration…in shapes such as flowers all over the temple.  We also recognized the similar symbolism of a main center pang with four additional, each one in a corner surrounding the main.  We also saw many large buddha statues standing in a row all in gold and all as tall or taller than us.  We walked through the grounds impressed with the beauty of the temples, took many pictures and are now starting to recognize the Bangkok architectural style.

After spending much of the day looking at the two main temples, we took a tuk-tuk back to the main city.  We stopped into the shoe store from yesterday to try on the shoes they had made for us and to pay our balance.

After dinner, we went back to our room to get things packed up…tomorrow we have some of the day to spend in Bangkok but then will get to the airport to fly to southern Thailand…a little island relaxation before going to India!!