We were back in the car today for our five-hour drive to Montelimar…an area we haven’t been to yet but is supposed to be beautiful, and was kind of on the way to Italy.

We first stopped in Beziers to find some lunch.  There was an artesian fair going on in the center of town.  They had all kinds of hand crafted vendors from smoked meats to cookies to leather goods.  Giff bought some very smoked meat at the first vendor and couldn’t resist the second vendor selling meat so opted for a thick piece of salami on a baguette…a meat sandwich without lettuce or tomato or even a little mustard…he wondered why I didn’t want any.  We of course picked up some delicious cookies as well and after a quick look around town got back in the car.

We arrived in Montelimar and saw our hotel was right in the center of town with a lot of people out and about.  There were restaurants and cafes all over the place.  Our place, the Sphinx hotel, was ideally located but the room was old and felt like a motel.  I did not provide the link because you will not be needing it.  I’m not saying there were bed bugs…but if there were bed bugs…this is probably the bed they would choose.  Thankfully we had bed bug spray and used it for the second time on our trip (thanks mom).

We found a little organic type restaurant with a cute outdoor patio to sit for dinner.  We didn’t exactly know what we ordered but we knew one involved chicken and one involved fish.  The plates came out with various small servings on each plate…a pile of sliced beets, sliced carrots, a piece of quiche, a tiny bowl of hot fish stew and chicken curry, a piece of bread with pate and a small carafe of house wine.  The surroundings were nice and peaceful but the meal was just ok.

After dinner, we went back to our room to book our around-the world-ticket with Delta Airlines.  We both had enough frequent-flyer miles to buy the ticket using miles.  This was great because it saved us a bunch of money.  After many many hours and at least 3 dropped calls using Skype…we booked our ticket and finally went to bed…way too late. 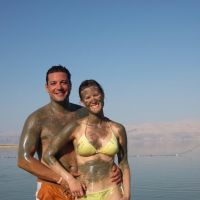