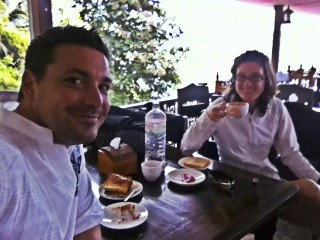 Maybe we are high maintenance when it comes to food…ok, we are, but still breakfast this morning consisted of thin basic pre-packaged white bread with jam that looked like a pile of red sugar gel…really nothing else was eatable.  Thailand has such amazing food but some of these tour hotels and lunches really are so bad.  Anyway, after barely eating…we checked out and put our things in the car.  The driver got in and after trying to get the car to start quickly switched us to another car.  The drive was literally 5 minutes down the road, he dropped us off at the little white building on the edge of the water.  We weren’t really sure what was going on since this was all organized through the tour guide, but we proceeded to stand in line and get our paperwork filled out to leave Thailand and enter Laos.

Once we were approved, they had us go on the back side of the building which is considered Laos and get in a long-boat with the other backpackers.  Our Laos guide was waiting for us and showed us to the boat while helping carry our things.  We noticed right away he had a very long pinky fingernail….strange.

The boat ride was about 2 minutes and then we pulled up to a small town in Laos where we had to fill our more paperwork and give our pictures in order to stay in Laos for our tour.  Once we were approved, we loaded our things into a truck and drove 10 minutes to a different area on the water.  There we saw a bunch of huge long boats docked and boarding people.  We grabbed our stuff and the guide showed us to our boat, where got our things settled.   There were about 30 chairs lined up with more space in the back to sit at a table and chairs to eat etc, the boat was narrow but quite long.   We noticed the other boats were loading many people but no one was getting on our boat, then the guide informed us no one else was allowed on our boat…this was a private ride only for us!  Giff and I felt really silly…we did not need anywhere near all this space and actually would have liked to chat with travelers from other countries.  Thailand Treks tour company had organized this whole SE Asia tour and had told us it was better to charter a boat instead of being on a “backpacker boat,” they made it sound like two different levels of boats…he did not tell us it was the exact same boat but with no other people.  We have been kind of disappointed with this tour company so far…the prices they charge are so much more than what you can really get when you are here.  To have other people on our boat, the cost for two days down the Mekong would have been about $25 but for a chartered boat (same one but no other people) it is more like $550!!  This specific tour guide, Hans from Thailand Treks has definitely made our trip much more expensive than it needed to be…we will not be recommending him to anyone.

We were introduced to the family who owned the boat, it was the father who was the captain…mother who served the food, grandma who probably helped in the kitchen, as well as two kids all of whom slept in the back of the boat.  We started our journey down the Mekong.  Our guide sat down with us and a Laos (pronounced without the “s”) map, he began talking about the country…where we were and where we were going.  We will be on the boat all day today as we float down the Mekong River watching locals as we pass by.  He explained how many indigenous people live all along the river in simple houses away from regular civilization.  They eat what they hunt or what they raise such as chickens or dogs.  The long-boat has a roof but is all open air, so we watched people washing their clothes, fishing, searching for minerals and harvesting rice as the cool breeze kept us bundled up in our coats.

Our guide explained how important the Mekong river is to the Laos people since the roads are so poor or non-existent.  This river is the main means of transportation not only to get from point A to point B but most importantly to get goods like rice and peanuts  from one place to another.  As we watched various people along the way…the guide told us how their people are organized into three different categories, Lao Loum-60% of the country’s people (lowland people), Lao Theung-30% of the country’s people (midland people)and Lao Soung -10% (highland people).  We found it interesting the ethnic groups are organized based on the altitude level they occupy.  Our guide belongs to the Lao Loum group and we were going to visit a village in the Lao Soung group…to see a tribe known as the hmong people today.

The mountains were beautiful and the land was so untouched, it was very peaceful along the river on our own long-boat.  We finally pulled over at the bottom of a hill to the local village we were visiting.  We were greeted right away by a few kids selling their string bracelets.  We jumped out of the boat with our guide who led us up the mountain on a path which opened up to a bunch of little shack-like houses.   As soon as we came up to the first house a tribal member who didn’t speak English showed us into his house.  The floor was hardened mud without any kind of rug, the sleeping area did not have a mattress, but a simple blanket on top of a hard surface.  There was some food hanging from the ceiling and in the middle of the hut was a place where a fire would be lit for cooking.  There were also big bags of newly harvested rice piled up.  It was only one small room shared by a family.  The shack itself looked like it was made of thin bamboo sheets and straw rooftops.  We also noticed what looked like a dried bunch of flowers pinned to the wall which they told us was to ward off the bad spirits.

We left the one room house and continued walking through the village…we peered into another house and saw a couple of people gathered watching what looked like TV.  Not all these tribes have electricity but this particular house appeared to have some type of electricity.  We continued walking past the dogs and pigs walking around which were obviously future food and heard a shower being taken which is basically water they pipe down from the mountains…which means no hot water unless they heat it on the fire.  The little girls whom had greeted us when we arrived have been following us the whole time persistent as they were, to try to sell a string bracelet to us.  As we were walking back to the boat, we came across a man who was part of the tribe…he had just gotten back from hunting and had caught a ferret type animal, he was showing us his prize.

We left the town realizing how truly basic these people were living, it is amazing people in the world are still living this way.  We have seen things like this on national geographic type shows but now we have seen it really exists with our own eyes.  Back on the boat, the family had cooked for us.  They set up lunch on the table and Giff and I ate things like fried fish, soup, mixed veggies and local beer.

We continued our journey down the river seeing a lot of activity along the shore.  It was obviously rice harvesting season as we saw bags and bags of rice being carried on men’s shoulders and placed into trucks/boats.  It was also interesting to watch as the women brought their sifting pans down to the water in hopes of finding minerals worthy of being sold.

We finally arrived in the town of Pakbeng which is the place everyone stops for food and a bed before continuing down the river tomorrow.  We got checked into our hotel which was a very basic hotel room without hot water or heat (it was very cold)…we even pulled out our anti-bug sleeping bags so as not to get bed-bugs.  Again, Thailand Treks tour guide (Hans) set us up at a super cheap hotel but charged us a lot…grrrrrrr.  From what we had read before arriving in Pakbeng, we needed to watch out for thieves who break into the rooms and steal bags.  It is a well-known stopping point for all tourists heading to Luang Prabang.  We hid our stuff as best we could and walked down the little hill to the small town to look for dinner. There was one main street which held all the restaurants, hotels and small shops.  We saw our guide sitting outside at one of the restaurants enjoying some fresh fish and he referred us to a local restaurant to order the well-known local specialty, Laap with khao (sticky rice).  We found a place which was by no means fancy…it looked family run and since it was outside had little ants crawling along the plastic table-cloth.  We saw the pork laap on the menu as well as the khao so ordered both.  We liked both dishes…the sticky rice was served in individual little rice baskets and the laap was minced pork mixed with fish sauce, small shallots, mint leaves, lime juice, roasted ground rice and enough chillies to make you sweat.  First we took a piece of rice…rolled it into a ball then scooped up some minced meat and put the whole bite in our mouth.  A table full of Thai people started chatting with us a bit and recommended we order the fish soup…which we did but it wasn’t really anything special.

After dinner, we walked the 5 minutes back to our hotel room where we bundled up in every long sleeve we owned since it was so cold.  We went straight to bed since we will be getting up super early to get going tomorrow morning. 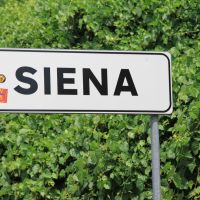